Been rigging my fully built character, the rigging process is deceptive because on the surface actually getting the skeleton in place was the easy part thanks to the joint tool. Once I got a hand of hierarchies it became easier to organize the joints and have them fit together into a working skeleton using an IK Rig. 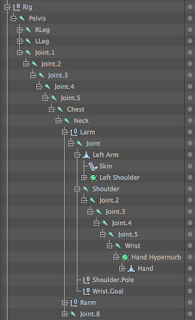 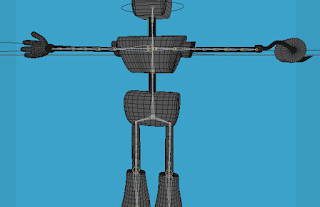 Connecting the limbs together used a hierarchy to make sure all movement was from the pelvis, and that the movement of the arm was from the chest etc. Much in the way the actual human body works.
Placing things within different joints was a challenge at first particularly with the shoulder pads as often they would move with the arm which would cause problems, or they would stay by themselves and the arm would clip through, these are some problems I have to correct.
Actually creating controls for the joints was done by making objects whose movement also affects the joints, using constraint tags to link the controllers and the joints so that I could use the controllers to move some of the joints, but the controllers can be in a separate folder outside of the hierarchy.
This made it easier to co-ordinate my controls because they could be organized away from the joints. These objects which don't appear in rendering can then be manipulated to manipulate corresponding joints and were mainly used for the feet, head, and some on the chest and pelvis.
The hands and knees were however moved on a separate system of "Goals", these points could be moved around to move the whole arm or leg with them. The way these were achieved was using the IK chain I made, with points at the wrists (in the case of the arms) being considered the end of the chain so this point was set to move the entire arm. From there, we set a pole which is basically an elbow as it means the arm can only bend so far, in one direction so that the character's arm can't just suddenly turn the other way like his arm has been broken. 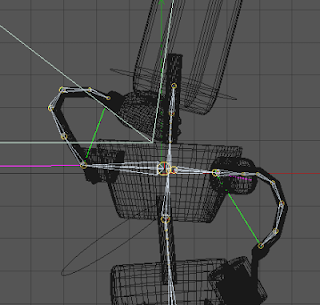 The legs move in a very similar manner, the goal is actually a little below the knee on the model and lifts the leg up, and when move forward will cause the leg to kick out with separate controllers moving the foot. The Pole is placed at the highest the leg can reach and about as far as the knee so that it will stay where it's supposed to and be able to portray walking.
Posted by Sonicmark at 02:05