With a deadline of January 17th and filming ideally starting on December 9th, this will leave me with basically a month to film and edit the entire project. It's going to be one busy month, so i've set myself a few targets to hopefully keep me on the straight and narrow and finish in time.

Blimey.
Posted by Sonicmark at 03:46 No comments:

Making up for absences.

Been away from this blog quite a while, I've been working on a project which I don't think has been mentioned here yet:
Lime and Plumishment.
It's a cartoon about a disgraced cop whose wife is killed by the mob, causing him to go spiralling into depression when he is forced out of his premature retirement by his chief in order to take down the crime outfit who destroyed his life. Also, he's an orange. 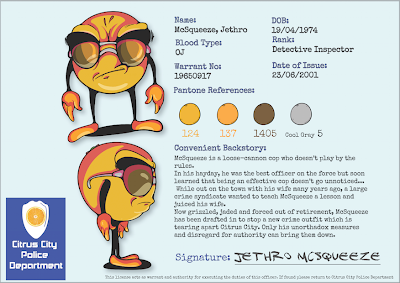 The cartoon's being produced with marionette puppets against a green screen background, where various scenes in this trailer for a fictional movie will be chromakeyed in.
The faces and arms will be hand-animated and placed ontop of the puppets in After effects.
The aim is to create something that plays it's self as seriously as possible, but in reality is just stupid to the point of being funny.

Currently the script is completed and the storyboards are being produced, with the idea being that filming the actual shots we need will begin on the 9th of December.
Posted by Sonicmark at 03:42 No comments: