I went to the firs set of lectures for animex focusing on games. While I haven't thought of the games industry as much as film and TV, I thought that it would be handy as character animation could be similar in some ways even if there are some differences and limitations.
There were a fair few interesting speaker who focused on narrative, including Rhianna Pratchett, head writer of the new Tomb Raider reboot, who talked a lot about how story and script informs the gameplay experience and vice versa. While this isn't entirely related to animation in the film sense, I suppose technical limitations can  still inform the plot, although not to the same extent as in games, where the experience is entirely mediated by the console. Very good talk, entertaining and offered a view on the work which goes into creating a plot for a game, in recent years sometimes rivalling film and literature due to the use of professional writers. 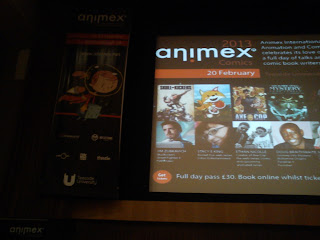 Another speaker was Eric Baldwin, from Naughty Dog Studios, famous for the Uncharted series. His talk was behind general development of Uncharted 3, giving the audience an insight intothe jump from Pre-production to Production. The talk showed several iterations of the teaser trailer which was axtually created while the game had next to no assets, the development teams actually use the teaser trailer to take some time and create assets for the game which basically kills 2 birds with one stone as it allows you to flesh out your game while making things which can actually be used. Some of the same stuff like animatics and other elements are similar to the production process of animation, so there were a few pointers to take away about how it works and what to expect. And also how to create useful things when you have very little to work with. Interesting and the speaker was good at relaying information (Once the technology sorted it's self out).

Final talk I found the most helpful was a lecture on the use of music in games, hosted by Austin Wintory, whose worked on several games, films and most famously having done the entire score for the PS3 game 'Journey'. He spoke very much about the emotional quality of music and how it lends it's self to the storytelling in ways which often you can't get across with words. The music can change the feel of a scene entirely, whether it be a film or a game. Journey's main emphasis was the grammy-nominated soundtrack, which actually progresses in time with the player, the instruments actually won't kick in until the player reaches a certain part of the level and things such as that to make sure the music is in time with the player's progression to try and keep the experience fresh and personal.
This sort of thing can be applied to my own animation, although I'm not a composer I can appreciate the importance of how music creates an experience for the audience.