Being a Sega fan, I felt like it was worth posting about this contest which they are putting on. The task is to design a character who encompasses Sega, and the winning character will become a mascot for the  NicoNico Douga live Show which they are putting on. (Think Japanese Youtube, where the company can host live steams) In addition, any games or merchandise made of your character will be sent to you and you will receive Toshihiro Nagoshi's signature, Sega's Creative director who will be judging the entries live on the show. 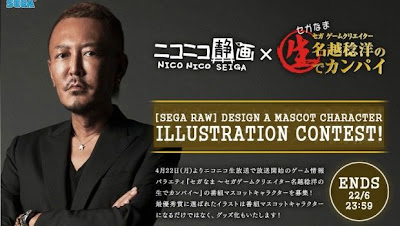 Rules:
Closing Date: June 9th, 2013
Picture format,  Any res GIF, JPG, PNG (File can't be larger than 10MB)
You also have to tag your entry with a specific contest title which is in Japanese.

While it's not stated whether or not contestants have to be Japan-only, the contest has been reported on several of the Sega news sites, with artists and illustrators wanting to take part. For many the ultimate prize is having created a character who becomes part of Sega history and could conceivably appear on games and merchandise. Not only might this be an amazing piece of publicity for the designer, but also would be something to add to the CV.