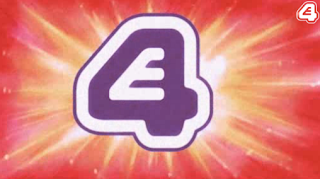 E4, a TV channel run a competition to find Stings to run on air. Having had a look at some of the finalists from 2011, it's my hope that I'd be able to create something that's good, or up to a decent standard. 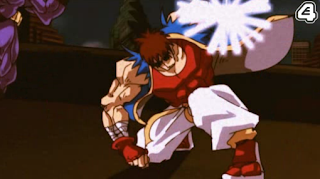 Probably my favourite, done in a 2D style and obviously inspired by Anime and Fighting games. The way that the logo is brought in is clever, because it has an excuse to be in there rather than just appearing. The actual quality of the animation is really good, as it's authentic to the frame-stealing which was common (And still is, for not for budgetary constraints) in Anime, particularly from the 40s well into the late 90s.
The attention to detail is in fact so great that film grain has been added to make the clip look campy and vintage. The character designs are stereotypical and are clearly influenced by something like Street Fighter, as the protagonist of the piece bares a striking resemblance to Ryu, the villain wears his oddly coloured hair up in the most amazing flat-top which is reminiscent of Guile from the same series of games, further cementing it's roots in fighting game culture.
The palette used is very bright and colourful, and the effects are very flashy as there it's lots of light and special attacks which is common of the genre, having a bright palette also helps to make it visually interesting as compared to lots of other E Stings, it is eye-popping but keeps the adherence to purple which seems to be a theme with E4.

A different pace from the other one, this one is themed after an advert for hair products. Another clever way to introduce the logo, as "E4" is the name of the product, so the logo is seen on bottles and boxes, so it's presented in a way which is less conventional than just showing the logo.
The animation it's self is very good, smooth and well drawn, very stylized to be funky and evoke a smooth nature. This is complimented by the colour palette which is not as bright as the previous one and follows more of a pattern, with the colours being darker and subtle to try and reinforce the notion that E4 man is a cool guy, in addition to wearing different clothes to fit the different backgrounds, finally ending on the sort of gradient background which is common of hair product adverts, this is where E4's trademark purple tone is introduced. The detail is quite nice as the movement is smooth and the characters are expressive, with the women emoting more because they're supposed to be in awe of E4 man, and E4 man himself being nonchalant and cool.
I like how stylized this one is, it's an interesting sting not just because it looks good but also because it thinks outside the box, and the retro charm adds a lot of personality to it.
My Kingdom for a Horse
By Benjamin Howell

I'm.... not entirely sure I can explain this one.... And I think that's the point. It's one of those things which is so nonsensical and crackers that you just have to laugh, or be scared, or react in any way. The point of it is that it has no point. The fact it's so off the wall will help to confuse every viewer who sees it, and this will make it memorable because it's so different.
The colour palette is bright, the drawings are simple. It gives me the impression that it looks not dissimilar to the american cartoon shows that E4 plays, it's meant to look edgy and simplified, with a bright palette. E4's logo is this time used as a shield, which is good presentation because the logo is not just shown to you. It seems to me that all the finalists use more than 2 colours, and all present their radical idea with the logo being part of the scenery or the plot, rather than it just appearing.
I don't entirely know what's happening here..... I need a lie down.

The first 3D one on this list. This one is the one with the least diverse colour palette, but that's not a bad thing because the variations on purple within the scene are a good thing, it doesn't need all the flashy colours because it helps to create a quirky and somewhat uniform environment for this robotic character.
The actual animation of the robot is great, it only races forward but it's quirky enough because it's all the robot needs to do to get the point across, the face it's self is expressive despite the fact it's just some dials and some teeth, but the use of teeth is enough to show the robot getting a but from the insane fuel. The way the camera is set up to take the impact of the robot adds a level of audience participation as the robot is going to crash into the viewer's television, and the fact that the it turns to static in the last second offers a good segway into whatever is on next.
The logo being presented as a fuel is a good way to work it into the plot and literally interacting with the character, it provides a quick route to the end of the advert as something quick and simple which does the job. The quick cuts also help to reinforce this idea of speed, and mean quick action leading to the apex of the action, where the robot crashed into the viewer.

The only stop motion sting on this list, but nonetheless very interesting.
The soldiers are brightly coloured in contrast to the rather plain background, which helps them stand out, the logo is presented just as is unlike the rest, but the background of all the figures used is pretty neat.
The use of toy soldiers is quirky, I don't really think it needs a plot, it's just there to entertain and provide something pretty to look at. The use of stop-motion and all the soldiers is a clever idea and probably not one you'd expect in an age where the average person has the tools to create 2D and 3D animation which can be professional level.